Lady Chatterley's Lover: A Book Banned in Several Countries AND Tried in a Court of Law! 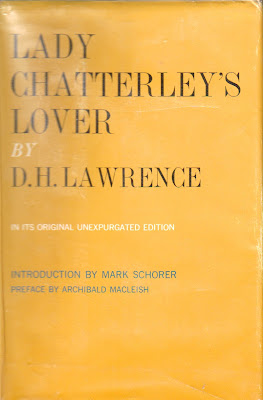 
You can read all about the troubled publication and legal history of Lady Chatterley's Lover on Wikipedia.


The story concerns a young married woman, Constance (Lady Chatterley), whose upper-class husband, Clifford Chatterley, has been paralyzed and rendered impotent. Her sexual frustration leads her into an affair with the gamekeeper, Oliver Mellors. This novel is about Constance's realisation that she cannot live with the mind alone; she must also be alive physically.

I have a personal tale about this book.

Back when I was in Catholic high school (back in the mid-1960's), my best friend suggested that I read Lady Chatterley's Lover, a racy pot boiler filled with illicit sex and infidelity--a definite winner for a 15-year-old girl who avoided any book that smacked of being "Literature." I had managed to dodge Jude, the Obscure, The Scarlet Letter, and anything Shakespeare. I had read To Kill a Mockingbird, however, because I liked the teacher.

And our school library had the delicious Lady C in its collection!

I was puzzled, though--why was such a book in a Catholic high school library?

And after reading the book, I couldn't figure out why my friend had thought this book was such a big deal. In fact, the book seemed overwrought and missing something. I was disappointed.

Fast forward to my college years. Lady C was a required book for a course called Love and Sex in Literature.

Groan...Not that boring old thing. Dr. Ames, my prof, just smiled and said, "I think you'll see it in a different light now." And then she challenged me to find out why.

Wow, was she right! This college edition was nothing like the flaccid (excuse the pun) work that I had read in high school.

Had my innocent mind simply blanked out all those racy passages?

Nope. After some basic library research, I discovered that my high school library had added a heavily expurgated edition to its collection, perhaps the librarian's way of solving the thorny problem of literature vs. pornography. Evidently, my friend and I had read two different versions of the same book.

I went back and found an expurgated version and compared it to D.H. Lawrence's intended version.

It was horrible; the deleted passages, albeit racy and sometimes even a bit profane, constituted the heart of the book. Lady C isn't just about two people engaging in an extramarital affair and having a lot of sex in forbidden places but an entire treatise on the vast class divisions in Great Britain. Despite some profanity--most notably, the F-word--the love scenes are actually quite sweet and mild, at least by today's standards.

Although a bit overwritten, Lady C is an important literary work; in 1959, U.S. Court of Appeals ruled in favor of its literary merit:


Lady Chatterley's Lover was one of a trio of books (the others being Tropic of Cancer and Fanny Hill), the ban on which was fought and overturned in court with assistance by lawyer Charles Rembar in 1959. It was then published by Grove Press, with the complete opinion by U.S. Court of Appeals Judge Frederick van Pelt Bryan, which first established the standard of "redeeming social or literary value" as a defense against obscenity charges.

The "redeeming social or literary value" standard was later upheld by the Supreme Court and has remained ever thus.

Any time we think something should be banned, expurgated, or censored, we should keep Lady C in mind.

We don't want to open that censorship door again just because we don't like someone else's depiction of sex.

Your thoughts?
Posted by Jennifer at 10:48 AM